¡Síguenos! / Siga-nos!
Inicio / Blog / Interview with Luis del Rey, «An archaeological site speaks to us and, if you listen to it, it tells you a story»
May 04 2014

Interview with Luis del Rey, «An archaeological site speaks to us and, if you listen to it, it tells you a story» A short time ago an essential book for all lovers of archaeology has been published. Its Spanish title goes “Guía Arqueológica de la Península Ibérica – España. De las colonizaciones a la caída del Imperio Romano de Occidente” (translation: Archaeological Guide to the Iberian Peninsula – Spain. From the [Phoenician and Greek] colonizations to the fall of the Western Roman Empire, by Luis del Rey Schnitzler, a graduate in Law, Business Administration and Tourism. This project started almost four years ago, initially as a weekend hobby. To write it, the author has been travelling around the Peninsula crossing it several times from one end to the other, leaving behind a path of more than 80,000 km. It is an essential work to visit the most important archaeological sites in Spain. Mediterráneo Antiguo [website] has been in contact with the author to know more about the making-of process and the guide’s contents.

Question – Why did you write an archaeological guide to the Iberian Peninsula?

Answer – I have always liked stones, everything that is old, those things which, although allegedly inert, convey emotions. An archaeological site speaks to us and, if you listen to it, it tells you a story. The fascination I feel for these places has led me to write this guide, beginning with the Spanish part of the Iberian Peninsula, which is the place where I live. My intention was to create something new that should be very attractive, useful and pleasant, not only aimed at archaeologists, but also at that audience that feels attracted by cultural issues, that likes to travel and discover new places.

Question – How is the book organized?

Answer – The bulk of the guide consists of its 42 chapters organized by a geographic criterion, except the first one about the Phoenician colonization that follows a chronological approach. Each chapter describes and locates a number of sites, monuments and archaeological museums that can be visited in a province or group of provinces that do not necessarily belong to the same region [Comunidad Autónoma]. In any case, there is a geographical or historical connection between these provinces. At the beginning of each chapter two maps are shown: One to locate the province or provinces within the Peninsula, and another with more detail, where the location of the sites is marked. It also includes maps of cities or archaeological areas with their monuments and sites, recommendations for visits, a brief chronology, a glossary of terms, an extensive list of websites related to the world of archaeology, an index of place names, a lot of  bibliography, and a selection of 250 colour images.

Question – What information is given for each site?

Answer – The guide does not only deal with sites, but also with unique monuments, museums and other establishments that exhibit or talk about archaeological objects. For each place the following is shown: (1) a brief description of the place, trying to highlight the essentials; (2) indications on how to reach it with precise data supported by GPS coordinates; (3) the local address, telephone numbers and websites, if available; (4) the days on which it is currently open to the public, stressing that data are subject to change; (5) a personal assessment of the place; (6) general considerations about the site: estimated visit time, scenic qualities, if there is a need to wear suitable footwear, potential dangers, when access by off-road vehicles is recommended, etc., and (7) site specific literature.

Question – What criteria did you follow to select each site?

Answer – The two fundamental criteria were that it should be representative of the Spanish sites, and it should be adapted for a sightseeing tour. Many sites have a great interest from a scientific point of view, but little from the tourist one. These sites are not mentioned. Besides, there are sites which I believe are vulnerable or unprotected, and in some of them excavations are in progress, where tourists should not interfere [at least not at the present moment]. In some cases I warn potential visitors that they will not see monumental remains, but spectacular scenery. A site does not consist only of ancient buildings or artifacts, but also of its environment.

Question – How was the process of documentation?

Answer – I have directly consulted several books on general topics related to history and archaeology, including other archaeological guides of Spain (Anderson, Collins), various books about historiography (3rd book of the Geography of Strabo, the Natural History of Pliny the Elder, the History of Rome of Livy, etc.), specific guides and publications on different sites, the Fontes Hispaniae by Adolf Schulten, I also read his Tartessos. One of my favorite sites to get references and refer to them is Zenon, the database of the German Archaeological Institute: http://opac.dainst.org. Also interesting is the database Dialnet of the University of La Rioja: http://dialnet.unirioja.es; the information posted at www.academia.edu; the web pages of the Catalan open access journals: www.raco.cat or that one of the “anaquel of Spantamicus” from the virtual archaeological Library of the University of Alicante. However, the main source of information comes from the site itself with its information boards (if any), its sights, the feelings it conveys and from people around, that tells you stories. On the other hand, cartographic information from the Spanish National Geographic Institute [Instituto Geográfico Nacional] was very useful. 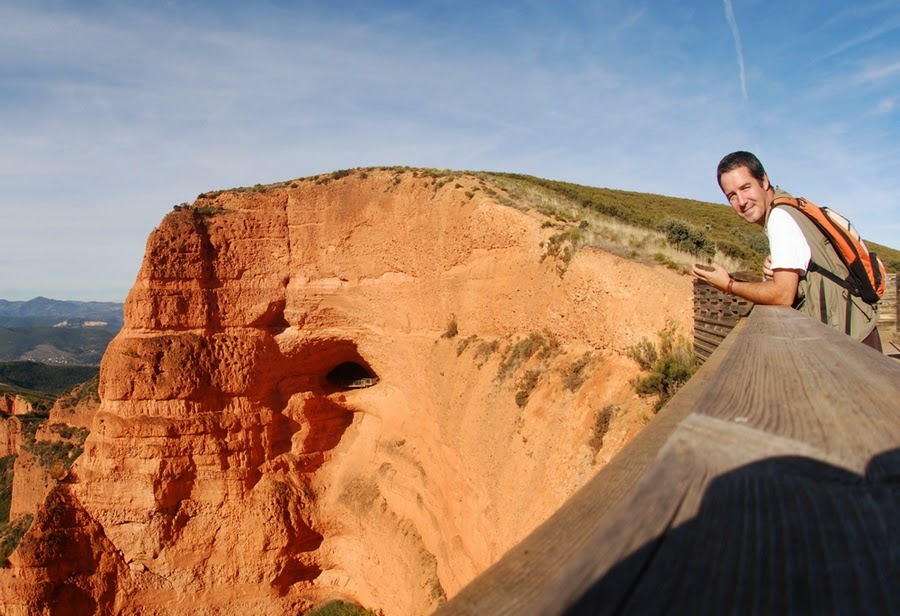 Question – What are, in your opinion, the five more important sites in the Iberian Peninsula?

Answer – This a difficult question to answer. Every site has something interesting and to draw attention to only five of them seems almost impossible. If we talk about a site, we must always refer to the site itself and its environment. Monumental sites are the archaeological remains of the present towns of Mérida, Tarragona and Cartagena; and those of the ancient Roman towns of Itálica (Seville) and Segóbriga (Cuenca). Particularly beautiful are: Baelo Claudia (Cádiz), near the Strait of Gibraltar; Ampurias (Girona), bordering the Mediterranean; Munigua in the Sierra of Seville; Las Médulas (León), the remains of a Roman opencast mine turned into a magical landscape; Tiermes (Soria), a Celtiberian/Roman rock town; Ulaca (Ávila), the enigmatic city of the “vettones”. Besides, there are: The Castro de Baroña (A Coruña) , Torreparedones (Córdoba), Cancho Roano (Badajoz), Contrebia Leukade (La Rioja), Tútugi (Granada), Talavera la Vieja (Cáceres), Los Bañales (Saragossa), Acinipo (Málaga), the Roman bridge of Alcántara and the Roman city of Cáparra (both in Cáceres), without forgetting the Roman Villas (La Olmeda, El Ruedo of Almedinilla, Fuente Álamo, Carranque,  Almenara-Puras, etc.) and, of course, there is the aqueduct of Segovia, and I will stop counting, because I’m forgetting half of them.

Question – You speak of the Iberian Peninsula, but not of the Spanish islands, The Balearic and the Canary Islands?

Answer – I had to start somewhere. My intention is to continue the series with new books, to extend the chronology of the first one (which runs from the Phoenician and Greek colonizations to the fall of the Western Roman Empire) or to talk about the archaeological sites of the islands. The Balearic Islands with their taulas, talayots and navetas [ancient buildings from the Chalcolithic] have an outstanding archaeological heritage, not to mention the remains of Punic and Roman times. I have to admit that I know relatively little about the Canarian archaeology. The field on which you can write is really broad. I will soon start with the preparation of the Portuguese part of the archaeological guide to the Peninsula.

Question – What is, in your opinion, the general condition of the Spanish archaeological sites: access, signaling?

Answer – If I would say that the general condition is bad, I would be giving the wrong answer, because several factors come into play. Many sites, especially those in the countryside, are often not well marked or are simply not marked, the access to them is not easy, and reaching them by car frequently impossible. This may be due to the lack of information about its attractiveness, quite often to a lack of budget, and in some cases people do not want to give it out. To mark the site and prepare the terrain to enable access is costly. Colors of information panels, if not properly treated, fade in sunlight, in a few years, if not in a few months. There are hooligans which destroy monuments. In most cases people do everything in their power, there are volunteers that mark sites, there are people who make paths, or authorities that asphalt roads. Although some criticism might be made, we should consider that it has its charm to seek and find, led by mere instinct. To me it has worked, but not always.

This website uses cookies to improve your experience while you navigate through the website. Out of these, the cookies that are categorized as necessary are stored on your browser as they are essential for the working of basic functionalities of the website. We also use third-party cookies that help us analyze and understand how you use this website. These cookies will be stored in your browser only with your consent. You also have the option to opt-out of these cookies. But opting out of some of these cookies may affect your browsing experience.
Necessary Siempre activado
Necessary cookies are absolutely essential for the website to function properly. This category only includes cookies that ensures basic functionalities and security features of the website. These cookies do not store any personal information.
Non-necessary
Any cookies that may not be particularly necessary for the website to function and is used specifically to collect user personal data via analytics, ads, other embedded contents are termed as non-necessary cookies. It is mandatory to procure user consent prior to running these cookies on your website.
GUARDAR Y ACEPTAR